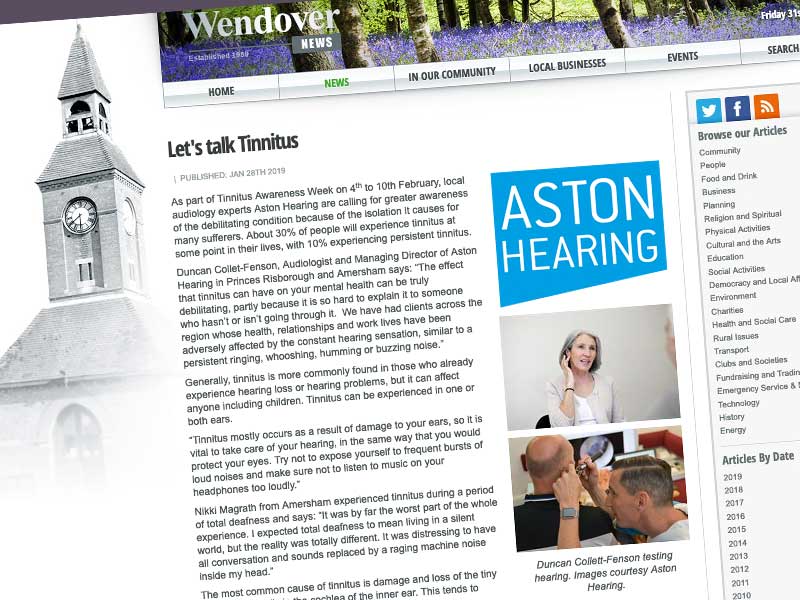 As part of Tinnitus Awareness Week on 4th to 10th February, local audiology experts Aston Hearing are calling for greater awareness of the debilitating condition because of the isolation it causes for many sufferers. About 30% of people will experience tinnitus at some point in their lives, with 10% experiencing persistent tinnitus.

Duncan Collet-Fenson, Audiologist and Managing Director of Aston Hearing in Princes Risborough and Amersham says: “The effect that tinnitus can have on your mental health can be truly debilitating, partly because it is so hard to explain it to someone who hasn’t or isn’t going through it.  We have had clients across the region whose health, relationships and work lives have been adversely affected by the constant hearing sensation, similar to a persistent ringing, whooshing, humming or buzzing noise.”

Generally, tinnitus is more commonly found in those who already experience hearing loss or hearing problems, but it can affect anyone including children. Tinnitus can be experienced in one or both ears.

“Tinnitus mostly occurs as a result of damage to your ears, so it is vital to take care of your hearing, in the same way that you would protect your eyes. Try not to expose yourself to frequent bursts of loud noises and make sure not to listen to music on your headphones too loudly.”

Nikki Magrath from Amersham experienced tinnitus during a period of total deafness and says: “It was by far the worst part of the whole experience. I expected total deafness to mean living in a silent world, but the reality was totally different. It was distressing to have all conversation and sounds replaced by a raging machine noise inside my head.”

The most common cause of tinnitus is damage and loss of the tiny sensory hair cells in the cochlea of the inner ear. This tends to happen as people age, and it can also result from prolonged exposure to excessively loud noise.  Factors which are known to influence the onset of tinnitus in some people include extreme fatigue, stress, loud environments, as well as many medical conditions such as ear infections, a perforated eardrum, and glue ear. Hearing loss may coincide with tinnitus.

There is currently no cure for tinnitus, but recent research has suggested that we may be closer to a cure than ever before. Some possible cures that are being developed including implanting an electrode into the neck near the vagus nerve so the patient listens to specific tones, which are paired with the electric pulses emitted from the electrode, causing a type of distraction to diminish the hyperactivity in the part of the brain which is causing the tinnitus. Alternatively, Tinnitus Desensitisation Therapy finds ways to redirect your brain’s attention away from the tinnitus so that you become less aware of the symptoms.

Duncan Collet-Fenson says: “Although research for these studies are still in their infancy, they have shown promising results. We hope that in the next few years these treatments may be available to everyone suffering with this condition but in the meantime, we need to talk about tinnitus and for those who need it to get help.”

About the Author: theAdmin