Audiologist of the year 2019 for the UK and Europe – WE’VE DONE IT AGAIN! 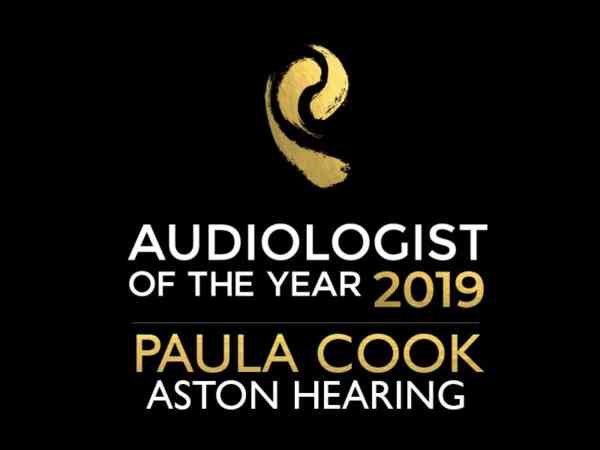 Our very own Paula Cook has been rewarded for her outstanding dedication to patient care with a prestigious European hearing industry award. Paula has been awarded the title of European Audiologist of the Year 2019, just weeks after being crowned the United Kingdom Audiologist of the Year. Paula beat finalists from France, Germany, Spain, the Netherlands and the Republic of Ireland for the coveted title, impressing judges with her dedication to going above and beyond in her patient care.

The winning entry was selected by a panel of judges, made up of professionals from the hearing industry.

Paula was nominated by her client Heather Cooper, who now lives in Turkey, having retired there following the death of her husband several years ago.

Eager to help her former client, after a back injury had left her incapacitated and unable to communicate easily with her hearing impaired neighbour Dora, Paula arranged to take her summer holiday in Turkey transporting her audiology equipment more than 2,000 miles/3,200 kilometres and fitting the two retirees with hearing aids from the clinic’s stock, to save on cost.

Describing the moment her new friend was fitted with her hearing aids Heather said: “Her face broke into the biggest smile I have ever seen. Then came the tears and emotions from all of us. We went outside of the apartment and wandered down to the beach. Dora looked astonished – ‘I can hear the sea’ – ‘I feel that I’ve been born again’ she said.”

In her winning nomination, Paula’s client Heather went on to explain that although Paula’s generosity and kindness was one of the reasons behind her nomination for Audiologist of the Year, it was Paula’s background and reasons for entering the profession that really hit home.

She described Paula’s dedication to helping her own children, who both have the same form of genetic hearing loss, which included a change in career to audiology: “She became involved in every way possible to ensure that they received the best care and technology available. She was such a regular in the audiology department that they offered her a job and that was that – her career in audiology began. Audiology is not a career for Paula, it is a life-long vocation.”

Accepting her award at an Evening of Excellence and networking event at the EUHA Congress and Exhibition in Nuremberg, Germany, Paula said: “It has been such an overwhelming experience, the congratulations and joy from colleagues, clients, family, friends and acquaintances has completely taken me by surprise. The highlight though has been the beaming smiles of my children, Ellen and Michael, who are so proud of what we have achieved throughout our journey- it is beyond words.

It is a privilege to go to work every day to help people access the world around them and bring them back into the family circle, tears and laughter are shared with many. “

About the Author: Kate Collet-Fenson

Originally Kate had no intention of joining her mother’s business; it was only when her husband, Duncan, started to work for the company that she became more personally involved. Once this interest was ignited she worked hard to help grow Aston Hearing Services and is responsible for managing the office on a day-to-day basis. She became a qualified Hearing Aid Audiologist in 2002. Kate has become very involved in the development of the network of Independent Hearing Professionals (IHP). IHP is a larger network of hearing professionals whose aim is to promote hearing health awareness to the general public.